Yesterday I went to see an exhibit in Hamburg called Verbrechen der Wehrmacht. This controversial exhibit deals with the crimes committed by the German army during WWII. When one thinks about all the nasty stuff that went down back then, they usually think that the SS was behind it. This exhibit shows that the regular enlisted army was also involved in some of the atrocities especially on the eastern front against the Soviet Union.

The exhibit is pretty text intensive with photos and actual correspondence from back then, along with short video clips and interviews. Unfortunately, they don’t have anything in English so if you don’t speak German it will be hard to understand what it is about. It took a real long time for me to read everything because of the different military style language used in some of the displays but I go through.

It was pretty tough. A lot of scary horrible stuff went down back then. When you read about it you get a sick feeling in your stomach and you wonder how in the world could that have happened. Sometimes I find it really strange that this happened in the same country I live in and yet I don’t see how it could happen here today.

I think that because of Germany’s history Germans have their government on a much shorter leash than other countries. It seems that if people here are displeased with some sort of government policy they will voice their dissatisfaction en masse. And that’s good. Some lessons have to be learned the real hard way. Anyway that is just the way I perceive it. Some Germans might disagree. But you don’t have to ask a German what he or she thinks because he or she will tell you. Kinda of like how you don’t have ask a rapper what his name is either. He’ll let you know in the first 10 seconds.

Weird. I see an ad in “Der Spiegel” for Mazda. There is a red sports car, the new RX-8, blasting around a corner. Up in the right corner there is a barely visible face of the communist revolutionary Ernesto “Che” Guevara. He’s looking down approvingly like a some sort of spirit from the afterlife. The tag line is, “How does one start a revolution? With the ignition key.”


Although it is pretty cheesy it shows what kind of pop-icon revolutionary freedom fighter status Che has over here. I don’t think, and I could be wrong, that you would see and ad like this in America. Using images of evil commies to help sell cars? In America? Doubt it. Just shedding light on a cultural difference.

the taxman taketh away and then, umm, giveth back?


I actually had to officially “leave the Catholic church” in order to get the Kirchensteuer back. Don’t worry. As far as the Pope is concerned I’m still a member of the club. I couldn’t really give a shit though.

I’m going to donate some of that to a charity that helps foreigners. Many foreigners here haven’t had such an easy transition in Germany as I have. Gotta spread the love. knowmsayin?

The Ball Is Dead! Long Live The Ball!

No wonder they couldn’t find him. 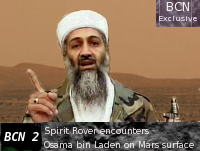 So I downloaded the Grey Album that everybody is talking about. It’s ai-aight. I wish a different rapper would released something called “The Black Album”. I really don’t like Jay-Z’s style. His flow is kinda like a wagon with broken wheels.

EMI should just clear the samples and make some chedda with the whole deal. Yeah, DJ Danger Mouse shoulda went through the proper channels and cleared the samples, but the Beatles/Apple Corps. are supposedly renowned for denying sampling requests. If he would have submitted the tracks and EMI would have denied the sampling rights they could have automatically claimed ownership, confiscated the masters, hard drives, DATs, and we may have never gotten the chance to hear it.

Or is it Michael Jackson who owns thee rights to the White Album? In that case he should grant the requests cuz he needs the cha-ching.

And what’s with all the hubbub over the gay marriage over there? Never-mind that it’s all about basic human rights. 50% of all marriages fail, are they afraid homosexuals are going to do it better? What’s the big deal?


Oh right, it’s an election year. I forgot. We need to have an campaign issue to deflect attention from the economy and the situation in Iraq.

Anyway here is a good article about it from Savage Love.

Today I was again on the Musikalisches Quartet, a radio show hosted by my friend Ingo. I introduced AIR’s Talkie Walkie. The others brought Tasty by Kelis, the self-titled debut from Franz Ferdinand and Blah Blah Nonstop by Stoppock, which was my least favorite. Over all it was a lot of fun and I wasn’t too nervous speaking German live on the air before tens of people. That is, if they were listening.

One more while we’re at it

IHT: Giving science the brushoff: “Although the Bush administration is hardly the first to politicize science, no other U.S. presidency in recent memory has so shamelessly distorted scientific findings for policy reasons, or suppressed them when they conflicted with political goals, as George W. Bush’s has.”

It’s the link that is sweeping the world!

Got no time to wonder why. Whoopee! We’re all gonna die!


I wonder if the secret report is real or if it is just a screenplay that got mixed up with W’s papers. If it’s a screenplay, the president is probably portrayed by Morgan Freeman.

Yesterday Karstadt had a super sale on CDs. They had 5 or 6 huge bins full of CDs, each for 4€. Most were total crap but there were a few gems to be found. For a total purchase price of 40€ I got:


I found this link today at memepool.com. It’s a flash based presentation of the history of electronic music. The guy who did it hasn’t exactly approached the whole thing in an objective unbiased way. He is often prone to dismiss a genre with one sentence. Anyway, there are all kinds of audio samples and brief descriptions to explain it along. Enjoy.