While I’ve been sick here I’ve read three books that I highly recommend.

Nickel and Dimed: On (Not) Getting By in America
The author enters the minimum-wage work force to see for herself how the people who have to work in that sector fair. Makes me grateful that when I was working in restaurants I was living with parents and had a support network.

Fast Food Nation
The fast food industry is evil. So evil. The one phrase that sums it up: There is shit in the meat. Vegetarians, I totally understand where your’re coming from. I’ll try never to eat fast food again. I say try because mmmmm….. burger.

And finally, The Da Vinci Code
I read it in about a day straight through. Totally awesome. My Dad and siblings weren’t kidding.

That Eazy-E can really rap his ass off!

I ran into Wesley Willis at a Kinkos in Wicker Park, Chicago. To be honest I smelled him as soon as I walked in the door. We were both making flyers for our bands. The clerk was trying to kiss his ass saying, “Wow, Wesley, I love your stuff. Do you have any tour/album plans, blah, blah, blah?” Wesely told the guy to fuck off and and get out of his way. As I busted out laughing he started lunging at me trying to head butt me I think. At the time I didn’t know that was his schtick. Then he told me to get the fuck out of his way, which I did due to the fact that Wesley was a very large man. Anyway he died last Thursday. Here’s a link to the the story. Here is another. I was hanging out at Heiko’s apartment in Lehrte a few months back and he had the Wesley Willis album with Rock and Roll McDonalds on it. It was a new experience for my friend Jens. We sat around and laughed. The refrain was in our heads for the remainder of the weekend.

Damn. Still sick. One week of vacation and one week of being sick. Vacation being the best week natch. I need DSL so I can upload those photos.

I’ll have some pictures up soon from the trip. For now though, a recap…

Getting to New York was a little problematic due to the blackouts. I was packing on Thursday night and was about to go to bed and I decided to check the news on last time before hitting the sack. I knew there would be some problems and in the back of my mind I thought I would be staying in Germany. On Friday, the day of my flight, Meike tried calling the Air France customer service line and it ended in a shouting match. The only way to find out what was going on would be to go out to the airport and take my chances.

The cute little French lady at the counter was most helpful and instead of sending me through Paris to JFK, sent me through Prague to Newark on Czech Airlines. Czech Airlines was pretty cool but very laid back. It wasn’t really clear that the flight was boarding. They just threw open the doors and let the word spread that we could board.

Got to Newark and was picked up by sister and a friend. Due to the blackout induced panic traffic, a normal 1 hour trip to the airport took about 3.5 hours. The trip back to CT was much quicker.

On Saturday I chilled and had dinner at my sisters place and saw Pirates of the Caribbean. I thought it was a good film. My only gripe is the dialogue of the British soldiers. They always had something witty, profound, and grammatically impressive to say. I know lots of Britons. They don’t talk like that at all.

On Sunday I surprised my mom when she came back from a short trip with my dad. I tried to keep it a surprise between just me and my sister but keeping a secret under wraps in my family is like trying to drink water with a fork. So everyone knew except my mom but she probably knew something was going on.

During the week I went into NYC and saw my friend Bob, who I haven’t seen in years. It was so awesome to see him. Equally awesome to see was my friend Kim. I had a really good time visiting them both.

There were some other people I tried to see but it just didn’t pan out. It sucks but that is the way it is. It is really hard to cram everything into one week. I mostly just wanted to spend time with my family.

Being in America was very surreal. I felt like a foreigner most of the time gawking at all the big stores and cars and streets. Very few people talked about the war in Iraq. In Germany and in most of the rest of the world it is the topic of the day. It’s one of the first things on everybody’s lips. In America people hardly talk about it. There was hardly anything about it on the news. It was present in the New York Times but still not discussed. It seemed that people just wanted to avoid conflict and argument so they just didn’t discuss it. Anybody that I did talk to about it was generally against the Bush regime as a whole and was not in favor of the war. Hmm, go figure.

I had a really good time and I wish I could have stayed longer but the ticket was so expensive just to stay an extra week. My advice is to book way in advance.

On Saturday night after a birthday/BBQ I went to the airport and took off. I missed my connection in Paris and had to take a flight 3 hours later. When I got to the terminal it was still 20 minutes till the connecting flight was to take off but they wouldn’t tell me what gate it was at and wouldn’t let me on the plane. Those fucks. Seriously, you never know what kind of surprises are in store when you fly with Air Chance.

To make things worse the altitude fucked up my ears and gave me a real bad cold/ear infection. Lame. I won’t be back to work till the earliest Thursday. Not so lame.

I’m back in Germany. The flight on “Air Chance” was about as expected. Now I am so sick. The altitude didn’t help. I went to the doctor today and I have infections of the middle ear on both sides. Rad. But my vacation has been extended due to the wonderful health care system here. I’m forbidden to work til Thursday. I’ll have updates and pictures soon.

I am in America. I went home to suprise my parents for their 30th wedding anniversary. I was scheduled to leave on Friday morning at 10:30 hamburg time, but due to the blackout I was rerouted to Prague and then to Newark. I recommend Czech Airways. Very nice but also very laid back.

I’m seeing family and friends which is cool. I had a great time with my friend Bob who moved to NY from Chicago.

America is strange. I’ll post more about this later.

Dude whatever. There is supposedly this massive heatwave gripping Europe by the giblit. I admit it is warmer than usual and it could become uncomfortable for those without AC (myself included) but this ain’t nuthin’

All I got to say is: Dallas, 105 in the shade beeyatch. It gets so hot there you can feel the heat slowly convect through your skull and then pass through the outermost membrane of your brain. The term “convection” is mainly used for non-solid objects. In this case, it is as if your skull is some sort of porous gelatinous barrier so it kind of fits. Then you feel this sort of numbing heat spread out from the center of your brain down into your medulla. I feels like your brain is kinda bubbling away inside your skull and trickling down your neck. Then if you ride the border between dehydration and delirium you see funny things. Kind of like LSD without having to take anything illegal. Or so I have read about. Thats why people freak the hell out in the summer and the number of population-thinning shootings from the top of tall structures increases. It’s the heat. But like I said, what is going on here in germany is nothing and I can handle it. So don’t worry. I’m complete control of all my faculties. Besides, I couldn’t find a high-powered sniper rifle.

There is shitty rag of a newspaper here called Bild or was it the MOPO? Doesn’t matter, both crap. Anyway one of them in a front page article called on the Chancellor, Gerhard Schröder, to do something about the heat like give away ice cream and beer and have the federal government and insurance companies pay for it. Shyeah right.

Here are the blogs of two people that deal with extreme heat in the most explosive city on the planet right now:

Turningtables: US soldier in Baghdad

Read This! What the hell is going on over there?

Remember, fascism and a police state doesn’t come all at once, it comes piece by piece. How far will we allow it go until we are all locked up in concentration camps.

If we don’t take matters into our own hands and do something about this now, then we are already prisoners of war.

I went to the beach on Sylt yesterday. It was fun. I think it was the first time that I went to a beach in almost 2 years. European beaches are a good thing. Very nice. 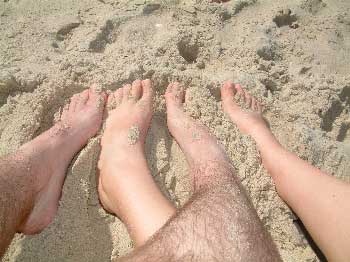 One of my favorite entertainers, Willie Nelson has endorsed Dennis Kucinich for President (Washington Post). Now that is cool. Cooler than cool. Go to the Willie page at the Kucinich for President website and check out the radio spots Willie did for Dennis. He’s also doing benefit concerts. Check and see if he is playing near you.

I went to Willie Nelson play in Stamford, Connecticut on the last night before I moved to Germany. It was awesome, and by awesome, I mean totally sweet. 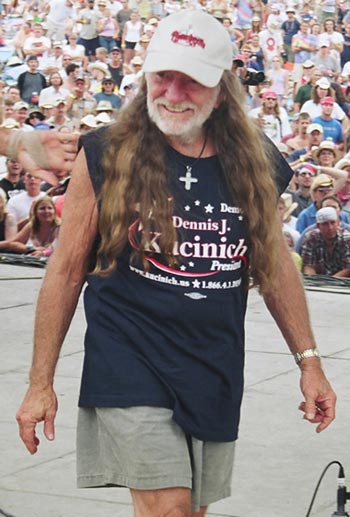