We are all doomed!

Look here. I wonder where Rumsfeld’s cryogenic freezing chamber is? Be on the lookout for a Scotsman weighing one metric ton, wearing a kilt, and going by the name of Fat Bastard. He’ll know whats up.

Man I was almost done writing a sweet post with all kinds of links and humor to make all my thousands of loyal readers giggle with glee, when my browser “unexpectedly quit”. Stupid technology. Anyway it had to do with this. We’re all gonna die. Yes I know everybody does, but it might come sooner than you think. Then again, maybe not. Who knows? Not me. Just saying. Ya know?

Oh so that is where all you Chachis come from.

I did a lot of that this weekend. My old apartment had a huge party with all kinds of tunes and lights. 180 bottles of beer, numerous bottles of wine and spirits gone in 5 hours. At a club this is no big deal but this was in an apartment the size of those super-duper stretch SUVs you see rappers driving in NYC. It was good. Then on saturday we went to a cocktail party. The host was turning 30 and decided to have a cocktail party with fancy drinks and the like. Me and meike were looking pretty snazzy and were of course the best dressed. Ended up spending the night at that one.

I just finished watching the making of the Dark Side of The Moon DVD. Totally sweet. Really good interviews with the guys and with Alan Parsons in the studio soloing tracks and showing how they did the tape loops with the mic stand for “Money”. There are also some solo performances. Tomorrow I watch the director’s cut of “Live at Pompeii”. Sweet.

It’s really cool when you reestablish contact with someone, with whom you haven’t talked to in over 10 years. Good to hear from you Steve.

It’s probably also really cool being surrounded by a dozen or so naked supermodels. That’s just hearsay though. That is unless all the supermodels that read this page want to hook up and coordinate something. I’m down. Meike will just have to understand.

Winning hearts and minds. Somebody’s tax dollars at work. Not mine. Yet.

I should try to update this thing more often. I tried to call my grandma but the damn cordless phone died before I even pushed the first button. Now I gotta let it charge. Stupid technology. Today the Simpson’s episode where George Bush Sr. moves in across the street was on. Although it was dubbed into German, it is still one of the funniest episodes.

This past week in Lüneburg were the Sülfmeister days. Now if there is at least one thing about Germans that kicks ass, it is the fact that they will party for any reason at the drop of a hat (maybe one of those hats with a feather in it). The Sülfmeister days were apparently celebrated for hundreds of years up until the 1930s. They revived it this year for the first time since then and it is supposed to become an annual event. The history of Lüneburg pretty much revolves around salt. In the middle ages salt was known here as white gold and it made Lüneburg one of the richest cities in Northern Europe. Lüneburg would export its salt to cities all over Europe. The last salt mass production facility closed in 1980 and that was the end of the Lüneburger salt. There are still smaller facilities that make small amounts, small bags of which can be bought at the tourist gift shops in Lüneburg.

But what is a Sülfmeister? I haven’t been able to get a straight answer but I think it was someone who was granted the right to make salt by the herzog or the king or something. Anyway, the Sülfmeisters had lots of sway and say in good ol’ Lüneburg.

At the festival there were all kinds of medieval craft workers and salt makers. Lots of historical costumes and such. There was log splitting and log rolling. They were also hauling these big ass salt barrels up and down the main drag. At the end they lit a big barrel on fire. I missed it but I totally wanted to see it. I don’t really know what the hell that was all about but had I seen it, I would perhaps have more to report. Alas, it was not meant to be. The irlfriendgay asway atelay and eway idday otnay akemay it in imetay. Know what I’m saying?

Enough about Lüneburg and it illustrious salty history. I updated my PHP and MySQL and will start rockin my M4d h4x0r Skill5. I’ve been meaning to get to build a database I can use at work, but I got no time. I’m always helping somebody getting their head out of their ass and getting their printer to work. I would love to build a CMS based on Typo3. It is going to require time and patience. Right now i am using Frontier, which totally sucks as far as content management systems are concerned. I feel like the content manages me actually.

Meike and I joined a health club last week. I totally didn’t want to but now I’m glad I did. After two weeks, my back pain is almost gone completely. I can bike for 40 minutes without falling over. I’m totally gettin BEEFCAKE!! Schweet.

I finally went to this thing here in Lüneburg called sonic-fiction. It is held every 2nd and 4th Thursday of the month in a bar called Jekyl and Hyde. It is supposed to be experimental electronic music/drum and bass/trip-hop/dj stuff. Everyone I know who has been there says it is cool. Of course the day I go there Hans von Strudel (thats the name I gave him, not his mother) with all the cables doesn’t show up till quarter to midnight stoned out of his mind. So there’s two problems:

1. the show doesn’t really get off the ground and

so I split. I’ll check it out next week. If you’re ever in LG (that’s how cool kids write it), I recommend going to Jekyl and Hyde just once. It is always an experience. Kickertisch (what we call foosball), Billiards and blatant flaunting of controlled substances. Don’t wear a tie.

Not much new here. Last friday was Der Tag der deutschen Einheit. It is a national holiday. It commemorates the reunification of Germany on October 3rd, 1990. On Friday I also saw Niels Frevert play. Not bad but he needs to play with his band. I need to hear more of his stuff as well. The show was at Café Klatsch, my favorite Lüneburg dive.

Um… is it me or is this picture saying a lot more? Welcomes Probe? Plugging leaks? Blowing cover? Looks like the kids down at CNN are bored or something. Judging by the look an his face it might be uncomfortable. 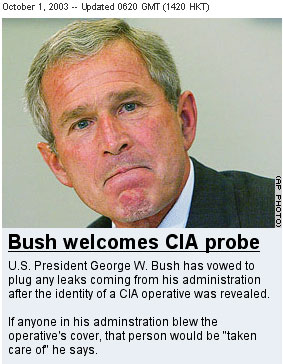