As of this moment it is officially my birthday. W007!!!11 But I’m still a year younger by St. Louis time. For a few hours anyway.

I just saw Fahrenheit 911 a few hours ago. It was pretty tough. Yeah sure Moore has his own agenda and you have to see past, or around, it but, damn… If Bush is elected to a second term we are all in serious trouble. I need some time to sort it out. So if you haven’t seen it yet, you should.

I’m trying to learn how to play the banjo shown in the previous post. Maybe someday I will be able to play just as good as these guys.

While I was supposed to be taking it easy over the weekend I did do a little home improvement and finally hung some instruments on the wall. I now have lots more space in my room without all those cases all over. It was a lot of work finding the the right Dübel and Schraube combination. 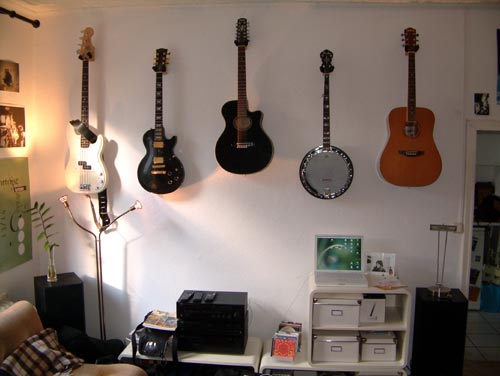 Well the weather is definitely improving. The weekend was great up until yesterday. I didn’t really get a chance to enjoy it however because I got some sort of tendonitis (Sehnenreizung is what the doctor called it) in my knee and had to do what I do best: Take it easy. Last thursday my friend had to help walk me home because it was too painful. Now I’m feeling almost tip-top. I was supposed to go up to the Baltic Sea and enjoy some barbecue and beers but it was not to be.

War and Emerging Remembrance (washingtonpost.com): An interesting article about German veterans of WWII and their coming to grips with the war and its aftermath.

” The shifting current funneled the landing craft toward the eastern end of Omaha Beach, where they disgorged men directly below Hein Severloh’s camouflaged machine gun nest. He recalls emptying belt after belt of ammunition, raking the shoreline for hours as wave upon wave of American GIs struggled through the blood-red surf.”

The effects of the war are still present in everyday live here in Germany. Every once and a while old bombs from allied raids are found in the woods or during construction and have to be detonated/defused. When that happens everybody in like a half kilometer radius needs to be evacuated. M’s mom watched Hamburg get annihilated from her attic window when she was a child. There was an anti-aircraft gun about a kilometer from her house. She remembers going out into the garden as she was a kid and seeing a fighter pilot (English or American, alive or dead, I don’t remember) hanging with his parachute tangled in a tree. Then ladies in the neighborhood cut down the parachute just to get at the silk.

So there was an article in the NYTimes magazine last weekend about adults with ADD and how it affects their work/lives/etc. I’ve been meaning to read it. The only problem is that it is 10 PAGES LONG! Ironic, don’t ya think? I keep getting to the middle of page 3 before my mouse finds the slashdot bookmark and I’m gone. If anybody has read it can you just sum it up for me?

So on the weekend the sun was out and the weather was great. And then it rained Monday and Tuesday. It’s an improvement.

I’ve spent the time indoors making music. Here is a song that I once played back in the StarPhase 23 days. Back then it had no lyrics and was more or less just something we would jam on. I recorded it two times after that on 4-trk and once on ProTools Free. Finally I’ve laid it down using the DIGI002. This is just a rough mix. The vocals need to be balanced a little and the bass needs de-muddying. It will probably be recorded again from scratch someday.

A joke I heard:


Marine One landed at the White House and President Bush gets out with a big pig cradled under each arm. The guard on duty remarks, “Those are some nice looking pigs you got there Mr. President.” The president proudly replies, “Aw thanks. These ain’t just any old pigs. These here are purebred East Texas razorbacks. I got ’em fur Cheney and Rumsfeld.” The guard snaps a quick salute and says, “Good trade sir.”

Ba-doom! Really folks, your too kind. I’ll be here all week. Be sure to tip your waitress.

I want it to stop raining. Seriously, its mid july and it has been raining since the beginning of June. Oh sure we get an hour or two of sunshine here and there but it isn’t enough to work with. It was so awesome outside today for like an hour and then it was replaced by a huge storm and now just steady showers. Grrrr.