I got a digital camera this week. The Fujifilm Finepix S602Z is nice. I haven’t really had time o seriously play with it yet. There’s lots of buttons. I will have to sit down and read the handbook. However, here is the first picture. This is the view out of my office window. Beeeyootyful ain’t it? I will post more pics in “Media” when I get around to it. 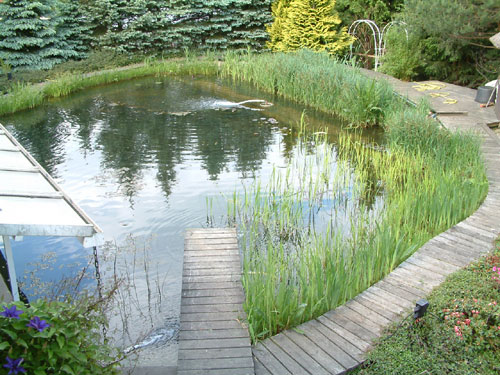 We went to see Yo La Tengo on Sunday night. It was cool and by “cool” I mean totally sweet. They played at the Fabrik which is a really nice venue. We actually stood on a balcony right over the band. I could read their set list and knew what the next song would be. They played a lot of stuff from the last album plus old favorites. The new stuff is mellower than usual but it is still good. Then they took requests and cracked jokes. 3 encores. Zee Germans lav show. Mach Show!!


Mike Ward opened for YLT and also lent some keyboard/guitar skillz on a few songs. His set was really quiet. I bought his CD called End Of Amnesia and it is really good. Its like a male Catpower/smacked out David Gray thing. Good with a seedless.

I just spent Friday and Saturday learning XML and I still don’t understand it. Oh well. I guess I’ll order a book from the English Book Shop at Amazon.de. They can usually hook it up. I ordered a digital camera today finally. I’ll be able to post pictures of German mullets soon. I don’t know if anybody even reads this crap. If they do drop me a line. The address is under Kontakt.

I went into the studio yesterday and I rocked. Du Kannst was pretty easy. A real Angus Young/country solo on the end of the song there. Groh, the engineer, is real nice. I got the impression he’s not into experimentation though. However, it could have been the lack of time available. On “Im Freien Fall” I recorded 4 different guitar parts. Mixing will be interesting. That is my favorite of the 2 songs. Both songs are kinda cheesy I’ll be the first to admit, but Im Freien Fall has the better hook. As soon as they are finished I’ll put them in the media section.


I need to find a second band that likes to get crazy and let loose. More rock, less pop. Richtung Sonic Youth und Yo La Tengo. I’ll have to wait until I’m done with classes at the Fachhochschule before I have time to worry about that. I also want to take an advanced German class. I feel as though I have reached a plateau with my German skillz. It’s very frustrating not being able to adequately express myself. I understand almost everything but sometimes when I open my mouth and try to speak German nothing intelligible comes out. Actually lots of people might same the same thing when I speak English.


Why hasn’t this article from the Washington Post been picked up? The US Arms Team (the ones responsible for hunting for and finding all of Saddam’s nasty illegal weapons) have given up and are going home because they can’t find anything. Holy Crap! Even I thought Saddam had some stuff and we would find it. I just didn’t think it was worth fighting a war and killing, what is the number now? over 3,000 innocent Iraqi civilians. Anyway this means that Bush and his cronies were completely full of shit and lied to the world and just went in and took over the place. What fucking assholes! I’m so ashamed of my government and what they have done. There is simply no justification for what they have done.

Man there ain’t much new. I played Kickertisch (foosball) into the wee hours on Sat with Jens, Steffi and Anna. Tomorrow I go into the studio to record “Du Kannst” and “Im Freien Fall”. It will be the first time being in a recording studio in about 3 years. I can’t wait. I’m gonna rock that shit yo.

Why does the USA insist on pissing the world off? And Americans wonder why other countries hate America. Well let me tell ya. It’s not because they hate our freedom. Actually, if this were true, with the way things are going with the systematic sweeping away of America’s civil liberties and all, these people won’t hate America anymore in the future because there won’t be any freedom. Ohhh. Now I see how it works.

But seriously folks, not only do we invade oil rich sovereign nations, who don’t play by our rules, but we also make sure they are provided with lots of tobacco so that they get hooked thereby creating a new market. Yeah capitalism! Smoke ’em if you got ’em.

Interesting story about why the Iraqis love American soldiers.

I biked my ass off today. I went with Jens, Steffi and Sio. First we biked along the Illmenau River here in Lüneburg and then sort of took a detour completely off the beaten path through a field when the trail came to an end. Then we went to a cafè and had a few drinks before we headed back to Lüneburg. I went to the apartment where I used to live, where Jens and Steffi still live, and enjoyed a nice spargel (asparagus) dinner cooked up by Jens. Spargel with potatos, white wine, and hollandaise sauce. Mmm-Mmm. Now I’m going to bed. Tomorrow is Monday:-( But it is also my dad’s birthday 🙂 Actually it is Monday already here but not in Connecticut where they are.

There were all kinds of crazy riots yesterday Hamburg and Berlin. I don’t live in either of the two cities so I didn’t see it. A classmate of mine René lives nearby the epicenter in Hamburg and was scared to leave his apartment. Cars were overturned and set aflame, rocks thrown, windows smashed, teargas shot, water cannons fired, protesters beaten, yada yada yada. There were some viable and serious protests and demonstrations but the headlines were mostly dominated by the assholes causing trouble. Apparently this has been going on in Germany since 1987 and there hasn’t been a peaceful Mayday in those two cities since. WTF? The fuzz in America wouldn’t put up with that shite at all. I suspect that this type of rage will manifest itself soon enough though in America cause people are pissed-off. I am suprised it hasn’t happened already.

Yo! Was geht’n Alter? Tag der Arbeit ohne Arbeit. Krass oder? Yesterday we went to this place called Schröders Garten to party. This is the same place we went to 2 years ago to the day went I first moved to Germany. There was a big tent with a sound sysem in it. Attached to said sound system was a bad DJ playing appropriately bad 80’s music. Earlier in the evening I was feeling ill and thought maybe I’d just go home and puke all night. I think I ate a sandwich with some bad tzaziki on it or something. Diluting my stomach with beer did the trick and I was soon after feeling like a champ.

So we danced and drank until 3am. Then we walked into the city center of Lüneburg and looked around in a few of the bars for Lothar, a former roommate who can often be found in this manner. Unsuccessful in finding him we searched for a drink only to be turned away at the Irish pub of all places. So then we walked or rather staggered over to a bar/dive called “im Pesel”. I hate that place. It’s in the small cellar of an old building. There’s no band, no strippers, the DJ sucks ass, there is no ventilation, and the restrooms seem to ooze something but they have the nerve to charge a cover to get in. On the other hand there seems to be no shortage of mullets (on men and women) and attitude. It’s just tough. The owners know it is the last place selling alcohol in town so they take advantage of that. Often though somebody opens up the backdoor and that’s usually how I get in if I absolutely need to. This time however, Dani, talked the door guy into letting us in with a discount. Anyway as soon as I get in some smacked-out junkie looking chick offered me some red pills, which I politely declined. If you are ever looking for a one night stand in Lüneburg and aren’t too picky about who you wake up next to I guess this is where to find it. So a beer and a Jäger and Cola later we split. All in all it was a fun evening.