So the time has almost come. I will turn 30 on Sunday. In order to avoid a common North-German tradition that befalls unmarried men on their 30th birthday, M and I are driving to Copenhagen for an extended weekend. For those of you who are geographically challenged, Copenhagen is the capital of Denmark, the happiest place on Earth. The drive is about 4.5 hours both ways and includes a ferry ride. I am really looking forward to it. I’ll be sure to check out Freetown Chritiania. I have been in Germany for over 5 years and this will be the first time I have visited the closest foreign country. Unless you count Bavaria.

Posting has been minimal lately, and for good reason. There is a bit of a heat wave going on in Germany. As most houses in Germany do not have air conditioning, I have been avoiding unnecessary sources of heat. This includes turning on computers that quickly turn my room into a mini sauna. Instead I have been biding my time in outdoor shady Biergartens with friends and loved ones. And I am not gonna lie, I have been gawking at lots of hot chicks.

Here are 2 pictures I have been meaning to post. They both deal with graffiti.

This one is across the street from my building. It was obviously written by a supporter of Antifa. The message is somewhat contradictory. “Fuck Nazis!” but then “Kein Sex mit Nazis!” (No sex with Nazis!). I’m torn. Should I fuck them or not? Congratulations renegade graffiti artist. You are making me think. 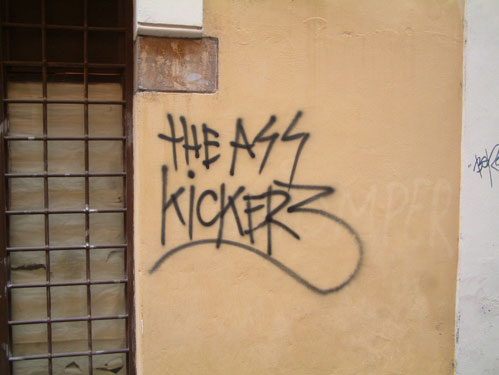 This one was found on the wall of a beautiful old building in the Trastevere neighborhood in Rome. It adds such a needed touch to the building’s otherwise lacking architectural presentation. I am glad to see that the Azz Kickerz are reppin’ hard. We gotz da East Side on lockdown beeyatches! Uh, prego.

Are you still reading this drivel? Well, as a bonus for sticking around, here is a rough mix of a track I did this week. For now it is called “cool beat” because that is the smartest thing I could think of when I had to save it in a hurry. It was recorded and mixed in Live. Download it here (5.2 MB of high quality MP3 lovin’).

See you all on the other side of the dirty thirty.

Tomorrow I will be on the “Langspieler” program on Radio ZUSA, live from the Universität Lüneburg. The show is co-hosted by my friend Ingo. We each introduce a new release, discuss it and then give it a rating. Yeah, kind of pretentious, but this what music nerds do who wish they worked in a record store in Chicago’s Wicker Park district.

It will be at or around 9pm (3pm EST) on Monday. The show can be heard live over the Internet via this link. Keep in mind in is in .ogg format, so you will need some obscure audio player that can play it back. So, for those of you who are not Linux admins living in your mom’s basement, you can use winamp for Windows or VLC for Mac.

If you manage to tune in, you’ll get to hear me speak German.

You can watch the astronauts bustling around on the Space Shuttle Discovery. Right now they are fixing something on the boom and remarking on the beautiful view over NYC. Cool. 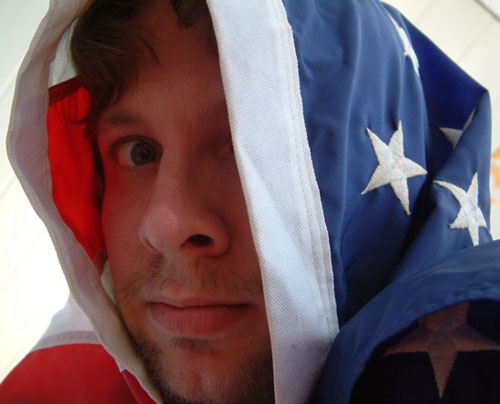 I wanted to have some people over and BBQ tonight but I couldn’t get it together. One reason is that I waited until the last minute. The other reason is that people are more concerned about where to watch the game. Since I don’t have a big screen TV, people are worried that they might drink too much and not get a good seat in a bar, thereby possibly missing the kickoff. Another reason is that their stomachs are too nervous and don’t want to eat.

I hung this flag in my window because I’m punk rock like that.

I have been back from Rome for a week now actually. It was a great trip. It was wonderful to see the family. The history and ruins in Rome were very interesting. Saw St. Peter’s and the Sistine Chapel. I saw a lot of amazing art and architecture. The weather was a bit too hot but manageable. The food and drink were expensive. The women were beautiful. We all went out to Pompeii for a day trip. That was incredible. The artifacts are amazing.

While we were there Rome was in the hot and sweaty grip of World Cup Fever. It seemed that every bar/shop had a TV with the games going. There are so many tourists from so many different countries, that every team had support from their fans when they played.

While flying back to Germany, our flight coincided with the Germany-Sweden match. The pilot was giving updates during the flight:
“The score is 1-0 Germany. Podolski just shot it in!”
“2-0, Another goal from Podolski!”

When he came on and gave the final score and said that Germany won, the passengers erupted with yelling and screaming. From the way people were flipping out, you would have thought he just said, “The plane is gonna crash and we are all gonna die!!” Just imagine if you were one of those passengers that falls asleep on the plane as soon as you strap yourself in and don’t wake up until you land. I bet they woke up with more than just a startle.

During the last couple of weeks as the World Cup Championship has been going on, I have noticed that the overall mood in Germany seems to have improved. I’m not the only one to notice. The New York Times and Der Spiegel noticed as well. This was very interesting to see as Germans are generally not prone to outbursts of flag-waving and national pride

Last night, as soon as Germany won the World Cup Quarter-Final against Argentina, I went outside to the Marktplatz in Lüneburg to gauge the local reaction. Lüneburg was going nuts. According to the local paper this was the longest Autokorso in the city’s history. Click the video below to see.

If they keep winning, it will only get better. But if they lose, how long will the good vibes last?