How do you do? I hope everybody had a wonderful Christmas/Hanukah/KWANZAA!! etc, etc. I sure did. we were at M’s parents house. Although her mom was super ill she just wouldn’t go to bed and rest. So she cooked. M’s dad cooked as well defying everyones expectations of his kitchen usefulness. We had venison on the 24th and carp on the 25th. It was very good although carp has a lot of bones and I had to spit lots of little bits into my napkin here and there. This is supposedly a North German tradition. On Friday I had enough though and I was extremely ready to go home. I’d could get into it here but I won’t.

Anyway, we booked a super last minute trip to Cologne/Köln for New Year’s and we will leave on Tuesday and get back on Friday. Not sure what we are gonna do once we are there but I’m sure we will find something.

Yesterday M and I went out to the Irish Pub (every city’s got one) and met up with Herbert, a Panamanian friend of ours and we proceeded to put ourselves around a few pints of various alcoholic beverages. We then wandered to a few other establishments to continue doing the same. At some point in the evening I was sitting around the table with a Panamanian, a Serbian, and a German. I then realized that each one of those countries has in one way or another been one the receiving end of American military “intervention”. There were no political discussions reflecting this because there didn’t seem to be any need to have any but it makes one realize how often America likes to go in and blow shit up in order to achieve little or nothing. The exception of course being Germany. If you ask most of the worlds inhabitants, they will probably say that they got what was coming, or it would have been worse if the Americans had not gotten involved and handed Germany’s ass to them, or something something, something. This is however not the point I’m trying to make. The point is…umm…uhh….that we were all sitting around the table enjoying ourselves and not letting the politics of our respective governments get in the way of that. Maybe if the leaders of countries would just get together and have a drink in Lüneburg while listening to some good music, the world would be a better place. That would be sweet. In fact I hereby declare myself a diplomat in helping quarreling countries/ethnic groups/Hetfields & McCoys sort out their differences over a pint/bottle/glass/snifter here in Lüneburg. What’s that? Muslim/Teetotaler/etc. and can’t drink alcohol? Most pubs have alcohol free beer in bottles. See? We will find a way. We shall overcome. Koffi Annan, I can be reached at the above email address.

Whoa! Real life mob story in the NYTimes. I think the whole thing is suspect though because there’s nobody named Fat Tony. You gotta have a Fat Tony! Mob Story Plays Out to the Usual Ending. Nobody Moved. (Free registration, arm, leg required.)

I decided I will tell you one more story. On sunday in Germany everything is closed except restaurants and gas stations. This was a surprise to me when I first moved here and it takes some getting used to when you are American and expect everything to be open 24/7. If you don’t have enough food to eat on saturday then on Sunday you either don’t eat at home or you eat whatever you can find at a gas station (Mmm bifi Wurst). I was feeling like a cold-flu thing was coming on so I wanted to get some stuff called Meditonsin. It some how holds it off for a while, sometimes avoiding it altogether. Of course all the Apotheken (pharmacies) were closed as well. But they have a nice little system here to deal with that on Sundays. They rotate schedules as to what local pharmacy will stay open during the off-hours. So all you have to do is go to a pharmacy and they should have a sign out front saying which pharmacy in town has the off-hours shift. Well a few pharmacies in Lüneburg don’t I discovered as I was wandering around trying to find them. So finally I find it and the off-hours pharmacy isn’t really in Lüneburg proper. It was a good 45 minute (in retrospect) walk away. It wasn’t too far especially in American standards because we’ll drive to pass someone the noodle casserole if only we could just fit the car in the kitchen, but a huge storm was brewing and the winds were really strong and I didn’t feel like walking 2 miles to pharmacy. But I did. And I got soaked and my hat, which everybody hates but me, blew away sending me off to retrieve it. On the trip I saw Dorothy’s house and cows blowing past and some flying monkeys. I got there and got the stuff and then fought the wind and rain back home. My Umbrella was totally useless. Its in a tree somewhere probably. That is my story. Ich wunsche Euch Fröhliche Weihnachten und einen guten Rutsch!

I am off work until Jan 5th, hopefully. Meaning, I hope they don’t have to call me in because a Printer doesn’t work or something. *sigh*. Tomorrow we are going to M’s parents house and gonna have ourselves a German Christmas. I’m not sure what that entails but we’ll see. M’s mom is sick which means that me and M might have to do the cooking ourselves. M’s dad might help but he’s next to useless in the kitchen. I don’t want to talk smack but he is. It’s just a cultural generational thing. If we have to cook it will be some sort of traditional big Fish or maybe rabbit or something. I wish I could say I know but I don’t because I haven’t been paying attention to what’s going on around me the past week. It’s winter, it’s cold, it’s dark. The world is lucky it gets me outta Bed. The sun is just getting over the horizon when I get to the office an it is pitch dark again at 3pm. I need to go to a tanning salon maybe. Hmmm. It’s a little whistley I know but it helped stave off the “I’m a vampire and I want to kill” feeling last year.

Ever notice how sometime I capitalize nouns that in English aren’t supposed to be capitalized? That is because in German ALL nouns are capitalized and my brain sort of straddles the two ebbing blobs of grammatical grey matter not knowing which one should be engaged at a given moment in time.

Last night I was bounding throught the streets of Lüneburg at oh around 19:30Uhr, full of Glühwein, when some guy asked me if I had bought any cds yet today. No, Says i. Do you wanna? says he and proceeds to tell me he is selling cds to people he meets on the streets that he recorded and produced. I’m skeptical because I’ve been ripped off on the streets enough in my life already, but we got to talking about influences, software, instruments, where we are from, und so weiter. He has 2 different CDs for sale. One Cd costs 5 and if give him 10 you get a bonus gift, that being the other cd. He walks away with 10 Euros more than he had when he met me and I walk a way with 2 CDs more than I had when I met him. Commerce. I was still skeptical when I put the CD in the player but I was pleasantly suprised. It is good stuff and if you want to hear some of it you can it check it out here: foolzparadize.

Other music I have been/you should be listening to:

George Jones- I’m late to the party, I know

Niels Frevert– I was at the the Hamburg historical museum with my parents last week and I saw him there eating Ice cream and hanging out with some kids dressed up like pirates. I didn’t say hello because I was dealing with a flipping out Handy (thats German for cell phone) and I was a big scaredy-cat.

This may be my last post before Christmas. I wish you all happy holidays. I’m off to wrap presents for all the good boys and girls.

I’m not feeling particularly inspired to write anything here. I think I’m getting sick. My throat has been sore for a few days and I’m feeling woozy. I’m going to attempt to tutor Detlef’s stepson in English. I’ve never done that before. I think he just has some trouble conjugating verbs. Maybe I’ll just ask him what are some of his favorite songs with English lyrics and we’ll go through them and I’ll explain the meaning. I wonder if he listens to lots of American hip hop like other kids. Poppin caps, bling bling, blowin trees and gittin jiggy might not translate to well into German. I can tell him what they mean but I might not be able to say why.

It might be hard for me to teach English even though I understand it. As a native English speaker I just don’t know why I understand it. Native German speakers can understand and speak the language way better than me but I can tell them things about German many of them never knew. For example all German nouns that end with -keit and -heit (Krankheit, Gesundheit) are feminine. All nouns ending with -chen (Brötchen, Mädchen) are neutral. All nouns ending with -ismus are masculine. Even the word “Feminismus” which means “Feminism” is masculine. Krass, oder? So when I tell some Germans that they have to stop and think about it because they never noticed it before. I find this interesting because the gender of a noun can have an influence on other words and meanings in a sentence all depending on the case and article. I have to stop and think about it often mid-sentence as I’m speaking but native speakers can just spit it out without having to think about it. But it is just the opposite when they speak English with me sometimes. In German the secondary verb comes at the end of the sentence. Sometimes if I formulate a super long complicated German sentence with all kinds of fancy verbiage, I have to stop and think at the end of the sentence because I forgot what verb I wanted to use. For example. Ich will zum Laden gehen. If I translated it back into English but kept the German word order it would look like: I want to the store to go. This is because German was invented by an ancient race of small green yodas that used to inhabit the central European plains.

From “Rather Good” here is an interesting interpretation of German cats. Fear the kittens.

While my parents were here they caught Saddam. Finally. This is good.

Well my parents are back at home safe and sound. I had a really good time with them. It was stressful at times but we all lived through it. Sometimes its hard to translate and still keep track of everything going. Here are a few pictures of the Weihnachtsmarkt in Hamburg: 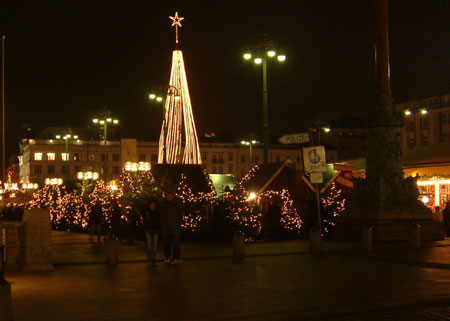 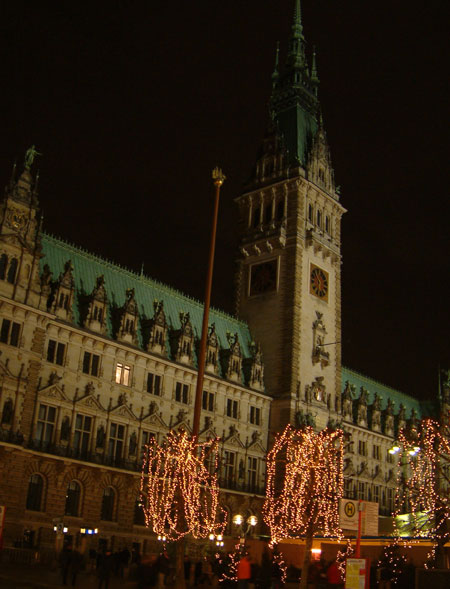 An interesting article from The Nation about how the media influences elections and other aspects politics based on money instead of the issues. Kucinich is raising the issue. Article here:

“When Ted Koppel steered one of the most critical debates of the Democratic presidential contest toward horserace questions about endorsements, poll positions and fund raising, the host of ABC-TV’s Nightline inadvertently created an opening for a serious discussion about one of the most important issues in America today: media policy. And Congressional Progressive Caucus co-chair Dennis Kucinich has seized that opening with a vengeance. “