The World Cup starts next week in Germany. Everywhere you look these days you see the official World Cup logo. It is all everybody is talking about. Tickets are a hot commodity and extremely hard to come by. They are also non-transferable unless you want to pay a 10? transfer fee for each ticket. Say you spent hundreds of Euros on tickets and you for some reason can’t make it. Tough. You can’t hand them off to your buddy. It is all very bureaucratic, which for Germany is fitting.

I remember the last one 4 years ago and people in Germany were flipping way out. Every time Germany won there were large groups of drunk people roaming the streets, shouting, singing and waving the German flag. More than usual I mean. Like when the Dallas Cowboys won the Superbowl x10. I found that interesting. Because of Germany’s history, many of her citizens have an ambivalent attitude towards patriotism. They may claim that it is not a German character trait and that they don’t understand this national pride that Americans have. Why should they be proud? It doesn’t make sense. Ohhh, but just you wait buddy until their team makes it to the World Cup Final. You’ll see all kinds of patriotism. Flag waving, National anthem singing (just the tune, because nobody knows the words, nobody), etc, etc. I can only imagine how insane it could get if Germany hosts the games AND makes it to the final.

Somebody also found it necessary to dra up a set of rules for wives and partners.

Me? I might watch a few games and cheer my team on but I won’t be getting into it that much. This is why I am somewhat relieved that I will be out of the country for the first half of the tournament. Of course I’ll be in Rome and the Italians are not known for their calm demeanor when it comes to Calcio, so it doesn’t matter. Some bloggers will be right in the thick of it though.

Last night was a warm-up game between Germany and Japan. Jens and I went to watch it in a local bar. There was a very international crowd there. I ate a very poor German attempt at a burrito. It ended up 2:2.

There is also some controversy here about what would happen if Iranian President Mahmoud Ahmadinejad decides to attend one of his national team’s games. German Chancellor Merkel has extended an invitation to him to attend. In Germany there is freedom of speech and expression with very few exceptions and, as far as I know, almost all of them have to do with Germany’s nazi past and the Holocaust. For example, it is a crime here to deny that the Holocaust happened. Ahmadinejad has done just that on more than one occasion and has called for the destruction of Israel. As you can imagine, this is a touchy subject in Germany. Now a diplomatic problem could arise if Ahmadinejad decides to express these opinions while on German soil. A foreign dignitary knowingly commits a crime in his host country. Should he have diplomatic immunity? Should he be arrested? Should he be charged and or fined? Would he be that stupid in the first place? What if (and here is a long stretch of the imagination, I know) Iran and the USA make it to the final? Ahmadinejad and George Dumbass Bush would have to sit next to each other. That would be rich.

I went to the cardiologist today for a follow up meeting. He says I have something called tako-tsubo syndrome. WTF? I still can’t get a satisfactory answer about what it is. Google isn’t much help. The doctor’s advice was to live each day like it is your last. Gee, thanks. Oh, and he put me back on the meds. Well, all except the beta-blockers. I’ll get a second opinion and hopefully try to get some information in plain English. At least I’m getting some answers. This was the first doctor who didn’t shrug his shoulders and say, “I dunno”. We’ll see.

Went to Josh Ritter last night at the Stage Club in Hamburg. It was a good show in an intimate surrounding. This is the third time I saw him in Hamburg. After the show he always comes out of the dressing room and talks to the fans and signs autographs. He is a genuinely nice guy with a good sense of humor. I mentioned him previously. Here he is on NPR.

One of the things that most Germans love about this time of year is Spargel, white asparagus. I mentioned it here before. There is a restaurant in NYC called Zum Schneider that will occasionally have a Spargel menu among many other traditional German dishes.

I found this genetically modified mega-spargel in Lüneburg during the weekend market.

I went to a cardiologist the other day to have a meeting. I just gave him a report of my recent medical problems and talked about how things were going. The first thing he did was take me off the medication I was taking. That was a relief. Those side effects like weight gain, lethargy, mood swings, forgetfulness and rashes were cramping my style. Now I can just concentrate on the mood swings. I have another appointment next week. In the meantime he’s going to hit the books and figure out what, if anything, is going on. We’ll see.

Today is a holiday in Germany. It is Christi Himmelfahrt/Father’s Day. I may have discussed that on this blog already but I couldn’t find the entry. Some celebrate this holiday in a special German tradition. Like most German traditions, this one also includes drinking a lot of alcohol. What better way to celebrate the Ascension of Jesus than walking around all day with your buddies dragging a wagon around full of beer and other assorted alcoholic beverages while creating a public nuisance? 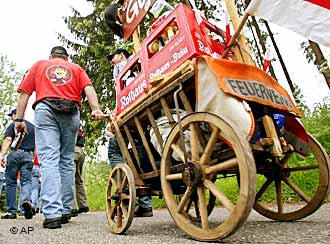 Most Americans may not know this, but once a year in Europe there is a contest on television called the Eurovision Song Contest. It grabs some of the biggest ratings of the entire year. Every participating country sends their selection to the previous year’s winners and TV viewers call in and vote on their favorite. It’s been going on forever and it’s a big deal over here. Anyway, Finland just won with their submission, Hard Rock Hallelujah, by the band Lordi, Finland’s answer to Gwar.

I actually thought Germany had a chance with their country-styled entry No No Never by Texas Lightning, but they didn’t even make it into the top half. I’ve heard more than one German complain that Germany consistently scores low “because of our history“. Whether or not this is true, I don’t know. But I’ll tell you this: all the music sucks. I know it may sound snobbish or elitist to say, but it is true. It all sucks. Period. It’s like Up With People* on Prozac and cocaine. Not a good combo. Don’t argue with me on this one. Although I’m nursing my third glass of wine, I really know what I’m talking about here.

*Full disclosure: UWP Alum Cast D 1995, but let’s keep that between us, okay?

Heads up to this swinging Hamburger for hippin’ me to the Bob Dylan?s “Theme Time Radio Hour” from XM Satellite Radio. There are two 1-hour mp3s of DJ Bobby D playing his favorites and offering commentary between tracks. Get it while you can before The Man shuts it down.

You didn’t hear it from me.

I was hanging out with Jens in our local stammtisch and I met a geek rockstar of sorts. It was none other than Kasper Skårhøj, the founder and one of the masterminds behind Typo3 with his lovely wife and beautiful baby girl Amelie. He’s like the Linus Torvalds of CMS. We talked shortly about the new 4,0 version. Kasper said 5.0 will solve a lot of headaches. We’ll see. It was just weird. I’ve met lots of famous musicians and celebrities in my travels, but it was also cool to meet a person who wasn’t necessarily famous, but who has had a big impact on the online community.

I have mentioned this once before, but here in Germany, and I assume in other non-anglophone countries, it is possible to hear certain songs on the radio that you won’t hear in the US. Well, not without lots of beeps littered throughout the song due to lyrical content. Maybe it will fly in the U.K. but I haven’t heard a lot of radio programming during my brief excursions to Scotland and Heathrow. So sometimes it is really surprising to hear what they will play here. English isn’t the native language, so most listeners aren’t paying attention and therefore aren’t offended. The 7 dirty words just don’t apply. So when I saw this Dutch ad for English classes, I had to laugh. (Not remotely safe for work, Turn your speakers down. You have been warned.)

Raskal mentions a new PR campaign urging foreigners in Germany to apply for citizenship. Although I can respect one’s decision to become a citizen of the country in which they live and work, I won’t be doing it anytime soon, or ever. I got too much pride in the the old Red, White and Blue to go and do something like that. Yeah, she’s all fucked up right now, but she’ll pull through. Well, maybe.

If I were to have children and raise them in Germany, and they decided at the age of eighteen to give up their US citizenship, I’m not saying it would break my heart, but I might have to drink that one off. If I understand correctly, children that have dual-citizenship because of one of their parent’s country of origin, will only be forced to give up their non-German citizenship, if they join the German military or get a job in the German government. The reason is because they are required to swear allegiance to Germany. There may some details there that need to be corrected but after my discussions with other expats with kids, that is the gist of it.

But my main reason for planning on always keeping my US citizenship, is that when the petroleum-based economy and all of its infrastructure comes crashing down, I don’t want to wait in the longer non-citizen line on my way to my tricked-out Atlas missile silo/bunker where I will await the coming of the post-nuclear Mad-Max society.

That, and being foreign is exotic. Oooooh.

Newsmagazine Der Spiegel, famed throughout decades for rooting out corruption and the vagaries of errant politicians, admitted Saturday some staff had been working for the government intelligence service.

I know someone who works for a company in the Spiegel family. I know this person quite intimately. I don’t wanna name any names but let’s just say I’ll be sleeping with one eye open until this blows over. Of course, if the NSA is up to snuff, they have a record of every phone call I’ve made in the last 5 years anyway, so it doesn’t matter. Another interesting thing is that every few months or so a server out of Virginia scans all the content from this site using wget. Should I be worried?