The weekend was uneventful except for..peanut butter. I bought a jar of PB on thursday. Peanut butter isn’t too popular here but it is available. I was feeling nostalgic for some peanut butter based meals this weekend. I made PBJ sandwiches on toasted bread, ummm. And spread it on some celery sticks. MMmmm. And PB & banana sandwiches that would make Elvis proud. Athankya. Thankyaverymuch. Meike didn’t believe it would taste that good but she kept making more and more sandwiches.

Designed this party flyer. If your in the neighborhood you should try to make it. Back to The Boots

Here is a list of German words I have trouble pronouncing:

4 Psychologie and other sciences. It’s just something about the -ology on the end.

6 folgen. It always comes out sounding like vögeln. That can have embarrassing consequences.

Just got this in the mail from Concerned Artists & Activists:

turning point.  Jim Hightower says it best — when asked what he thinks of 3rd

parties, he says: “I’d settle for a second party.”  So would we.

Administration agenda of corporatism and war.

We want Democrats to stand up against the Bush Administration’s war in Iraq,

and the continuing occupation which is so costly in lives and resources.

expanded educational opportunities and environmental cleanup paid for by cuts in

the bloated Pentagon budget.  Our country’s military spending now rivals that of

all other countries in the world combined.  Yet most Democratic presidential

candidates have declared the Pentagon off-limits to cuts.

We want a Party that challenges NAFTA, the World Trade Organization and a

environmental and labor standards around the world.  Unfortunately, most

If you agree with us on what the Democratic Party should stand for, there is one

sure way of telling the world: Support Dennis Kucinich in the Democratic

presidential candidate to oppose Bush’s war in Iraq, and one who has never

wavered in his opposition.

He’s the only presidential candidate who voted against the “USA PATRIOT Act.”

We know Dennis.  We admire him.  We endorse him.

him spread his progressive Democratic message to more and more people.

Contributions are needed now, as the Sept. 30 is the financial filing deadline —

and your donation to the campaign is doubled thanks to federal matching funds.

It’s quick and easy to donate.  Please do so by clicking here:

principles can inspire and win.

Please forward our email to others who share our concerns and values.

Had a show the other night in the small village of Hoopte. It was a big party with lights, video projectors, stages, sound systems, beer , bratwurst, motorcycles, and go-go dancers.

A few things that rule:

Döners with lots of goat cheese.

When shit works the way it is supposed to.

When your 10 cents short when buying something and the cashier doesn’t sweat it.

Second song on FooFighters album “one by one”. The one where Dave Grohl and Jack Black are in the video together.

When you are playing together with other musicians and you get that groove and it feels good.

Really weird weather here today. First it was raining really hard but the sun was shining bright. Then it was super stormy and dark without a drop. I took a picture of some windmills on my way home from work. 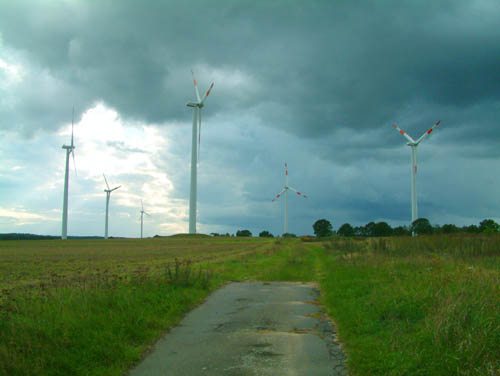 Awww yeah. Cha-Cha-Cha-Changing up the colors with some CSS. It’s so easy. Let me know what you think.

Nothing new coming to my mind right now. Its thundering and lightning outside. I probably shouldn’t be on the computer. Oh I know what to wite about. Something that has been irritating me for the last week und zwar…

Now I hate to say I told you so, but I did. The reasons for going to war in Iraq were completely bogus. The American people were lied to and so many innocent americans and Iraqis had to die. It’s sick. The two main reasons were Weapons of Mass Destruction© and Saddams involvement with 911©. Time, the great teller of truth, has so far not revealed one iota of nuclear, chemical, or biological weapons. Dubya, the great king of monkeys, has just recently admitted that there is no connection between Saddam and 911©. But what is this? Its from the White House’s very own website.

Consistent with section 3(b) of the Authorization for Use of Military Force Against Iraq Resolution of 2002 (Public Law 107-243), and based on information available to me, including that in the enclosed document, I determine that:

(1) reliance by the United States on further diplomatic and otherpeaceful means alone will neither (A) adequately protect the national security of the United States against the continuing threat posed by Iraq nor (B) likely lead to enforcement of all relevant United Nations Security Council resolutions regarding Iraq; and

(2) acting pursuant to the Constitution and Public Law 107-243 is consistent with the United States and other countries continuing to take the necessary actions against international terrorists and terrorist organizations, including those nations, organizations, or persons who planned, authorized, committed, or aided the terrorist attacks that occurred on September 11, 2001.

Hmmm. Look real close at point number 2. Does that mean he lied to congress? I am not a lawyer but it seems a little shady. Then again so does everything else about this presidency. So. Anyway. It makes me angry that so much life was wasted (on both sides), so many resources squandered, so much sympathy and good will towards Amerca simply pissed away. I don’t understand how this guy is not already impeached. Clinton gets a blowjob and its a constitutional crisis, but Dubya sends thousands of young men and women off to a foreign land to fight a bullshit war for the political and economical gains of his friends and there is not a revolution going on? not even an armed skirmish? America needs an uprising. I don’t get it. I just don’t get it. That would never happen again in Germany. It happened here once and it will, I hope to God, never happen again. Europeans have seen what happens when leaders run amok with unchecked powers. I’ve heard a few Americans say that they don’t mind giving up some freedom so that the man can better protect them. Yeah, thats what the germans said after Hitler brought in some sweeping changes after the Reichstag was firebombed. At the time the communists were blamed but history has shown that it was actually Hitler’s henchmen.

I know the constitution is supposed to provide a legal and stable way for the people to swap out unfavorable and/or dangerous leaders, but it doesn’t seem to be working. If all of America’s veterans went to war and fought to protect the freedoms and stabilities offered by the Constitution and Bill of Rights, I don’t understand how Americans let this kind of shit keep happening. When politicians in Germany are found to be doing something shady their careers are over in about 2 days. Perhaps it has something to with the history. Get the diseased apples out of the bunch before the rest go bad. Don’t get me wrong. Not all Geman politicians are angels. They are politicians. Of course there are a few snakes in the grass. There just seems to be a sense of accountability in the German political system that’s all.

Optical illusions. I should go to bed.