Thriller was the first album I ever owned. I think I got it for Christmas in 1983 if I remember correctly. I loved that record. I wore the grooves out. I’m not embarrassed to say, that I even had a glove made of silver lamé and could do the moonwalk (well, maybe a little embarrassed). When the John Landis directed video for Thriller came out, it scared the hell out my siblings and I. My sister had a poster of MJ on her bedroom door. After we watched the video, we were scared shitless and couldn’t fall asleep until one of our parents took the poster down. “He’s a zombie! He’s gonna get us!”

When I was working as an assistant engineer in Chicago, one of the engineer/producers that made my life hell, but nonetheless taught me a lot, assisted Bruce Swedien on some of the Thriller sessions (That makes me 2 degrees away from Thriller. I might put that on my résumé). This same person also worked on the Superbowl Shuffle, so make of that what you will.

Anyway, Thriller was the only Michael Jackson album I ever had. I think after that I got 1984 from Van Halen and didn’t look back. I listened to Thriller again sometime last year when the 25th anniversary edition was released. “Thriller”, “Billy Jean” and “Beat It” really stand out, of course. The rest is good as well. The collaboration between MJ and Paul McCartney always reminds me of the bad blood that developed between them shortly thereafter.

Unfortunately, as we all know, his life turned into a tragic freak show of David Lynchian proportions after that. I suppose with his upbringing and celebrity situation, it shouldn’t be too surprising, but holy fucking shit, what a god damned freak show!

With all his problems and, ahem, dalliances, he was still a musical pioneer who contributed a lot to modern pop music. Was he a genius? Sure. Not really my kind of genius (again, the freak show), but a genius nonetheless.

There is an interesting article over at edge.org (yeah, I never heard of it either), by Lera Boroditsky, about language and how it shapes the way we think. it touches on a lot of things that I somehow noticed when learning German but couldn’t really articulate.

What it means for a language to have grammatical gender is that words belonging to different genders get treated differently grammatically and words belonging to the same grammatical gender get treated the same grammatically. Languages can require speakers to change pronouns, adjective and verb endings, possessives, numerals, and so on, depending on the noun’s gender. For example, to say something like “my chair was old” in Russian (moy stul bil’ stariy), you’d need to make every word in the sentence agree in gender with “chair” (stul), which is masculine in Russian. So you’d use the masculine form of “my,” “was,” and “old.” These are the same forms you’d use in speaking of a biological male, as in “my grandfather was old.” If, instead of speaking of a chair, you were speaking of a bed (krovat’), which is feminine in Russian, or about your grandmother, you would use the feminine form of “my,” “was,” and “old.”

When I first learned German, I assumed the word for cheese (Käse) was feminine, mainly because, like many other feminine nouns, the word ends with an E. I also falsely assumed that there was some sort of logical derivative order: Cheese comes from milk (Milch, also feminine), which comes from female mammals. Well there you have it! Plus, cheese is yummy and soft (mostly) and chewy. It all fit neatly together in the language compartment of my little brain.

Then I found out after years of saying die Käse, that I should have been saying der Käse and I had been forming my articles and pronouns incorrectly. I explained my logic to the person who set me straight and she said, “Nein, Käse ist männlich, weil er stinkt!” (Cheese is masculine because it stinks)

It is fairly safe to say that summer is on. The weather has been consistently warm for a few days and there is lots of grilling in effect. We’ve had people over a few times to grill. We do it on the street, commando style. There is probably a law against it, but nobody has complained yet. This weekend is probably going to involve some grilling as well. Germans are all about grilling. At the weather website, wetter.de, there is even a, what I call, the Grill-o-meter. Check it out! It’s 3-4 Würstchen grilling conditions everywhere except for down south in the mountains. Don’t think for a minute that will stop them though. 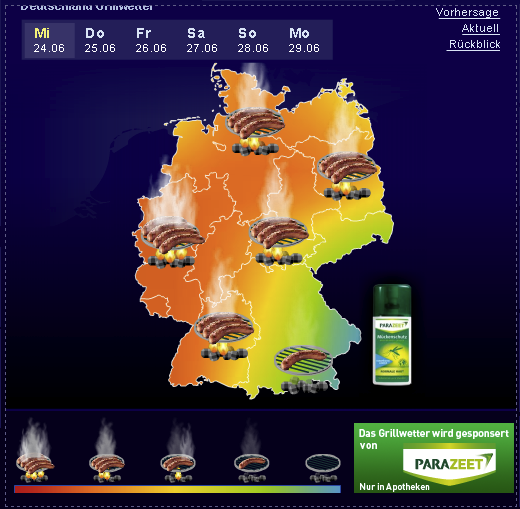 Also last week was Stadtfest. It was a bit rainy but it didn’t stop the Lüneburgers from wilding in the streets all through the night. I took a few pictures but only really got into it on Sunday when it was almost over. On Friday night I did get a chance to see a band playing here called Miyagi. I was impressed with their show. It was much better than the CD I bought afterwards. The CD isn’t bad by any means, it just doesn’t rock as much as they did live.

Thanks, I’ll be here all week!

Koko Taylor more than once said she hoped that when she died, it would be on stage, doing the thing she loved most: Singing the blues.

I used to work at Streeterville Studios in Chicago in 1998 a few years before it went under. I worked with a lot of well known and phenomenally talented people but with very few true professionals. She was one of them.

I assisted on a Koko Taylor session for Alligator Records where I think Keb’ Mo’ was sitting in on acoustic slide. Koko was a quiet unassuming little old lady with a soft raspy voice sitting in the break room while we were getting things ready. She must have been about 69 or 70. She looked like somebody’s grandma just hanging out.

After the band played for a few minutes to get levels and warm up, she came in and brought her own microphone, a Shure Beta 58 (not one of those fancy ones we had laying around that cost over a grand). She plugged it in and got a quick level. Then the engineer hit record and this little old lady opened up and let it rip. I remember thinking, “Holy shit! Where did that come from!”

The band was on. She only needed 2 or 3 takes and she had it. In and out. She unplugged her mic, dropped it in her purse, chatted with the producer a bit and then left. I did the recall and documentation, cleaned up and went to my next session. I don’t remember what it was.