Here is a quick post from Bad Bevensen, the happeningest hotspot on the Lüneburger Heide….sigh. I’m doing fine. The Reha-Klinik is nice. I am by far the youngest one there. The food and staff are nice and I have lots of activities (swimming and gymnastics zum Beispiel) to keep me from going insane. Despite all that I am pretty bored between the scheduled activities.

I have some more heart tests this week but as far as they can tell, everything is okay and it appears to have been a fluke. Maybe we’ll never know. I will get out next Tuesday. I have plenty to read. Maybe more later….

My brother and his girlfriend left last night back to Stuttgart. My Brother is probably on his way back to the US right now. It was a good but short visit. These visits are never long enough. We just hung out and took it easy. I showed them a little around Lüneburg, had some coffee and a bit to eat.

Tomorrow I go to Bad Bevenson for 3 weeks. Today I’m making sure I have the proper forms filled out, enough clean laundry and everything else I need for a 3 week Reha. I assume it won’t be much considering I’m not there for vacation.

I hope they figure out what is going on with the ticker. I’ve felt fine for the past week. I haven’t done anything too strenuous per doctor’s orders. The medication has made me feel pretty psychedelic a few times. That has only been during the first hour or so after taking it. After that it tapers off and I just feel… groovy. Hopefully we will also figure out a better dosage for me.

And some video….. Johannes Schlueter: A German making his way in America

The hospital I stayed in last week is called Städtisches Klinikum Lüneburg. It was the first time that I ever had to spend the night in a hospital or stay for any extended period of time. The doctors and nurses were all very nice and friendly. They were all patient when explaining procedures and various medical terms. It was interesting relearning basic high school anatomy in a different language. I can’t speak for all hospitals in Germany but I got what I felt was great care at this one.

I honestly doubt I would have gotten such great care in America. I could be wrong but from what I hear, I would have been in and out of an American hospital within 2 days. Of course, I haven’t received any bills yet so we’ll see how that develops.

The one thing that makes the difference are nurses. Treat ’em nice.

During an extended hospital stay you will probably get the chance to watch lots of TV. The one thing you don’t want to watch is hospital dramas. I don’t need to be reminded that people up and die in hospitals. If I wanted to watch that shit I could just open the door and look down the hall.

My new medicine makes me woozy.
——–
Update: I just got my hospital bill. Total amount due: 70€. That’s about $84.50 for one week. There goes the summer home in Vermont. 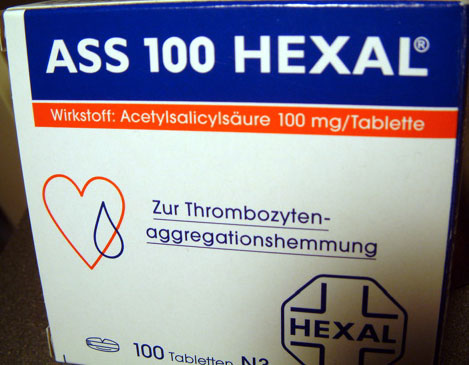 Hmmm, you’d think they would have people who’d pick up on this sort of thing. You might logically deduce that Zur Thrombozytenaggregationshemmung meant roughly “A cat just walked across the keyboard” but it is just a fancy German word for blood-thinner. It is basically Chuck Norris roundhouse kick strength aspirin.

I was released from the hospital yesterday around noon. I was supposed to be in for at least a week but they let me go a day early.

They are almost totally sure that it was a very acute heart attack caused by a blood clot in the coronary vessel. The blockage was so slight that it dissolved or dislodged itself due to the pressure. This is apparently quite common and happens in about 10% of heart attacks, many of which go unreported because they are not even recognized as being heart attacks.

Still uncertain is where the blood clot came from and whether or not there is a high risk of it happening again. The doctor said it was not the result of a thrombosis caused by laying in bed for 3 days. Nor was it caused by any defects such as faulty valves or holes in the wall of the heart. It could be a hereditary predisposition as heart problems seem to run in the family. This lack of certainty is frustrating. Was it a one-time fluke? Could it happen easily again? Am I walking around with a time-bomb in my chest? Questions, questions! Even though I am out of the hospital the doctors are still doing blood tests to determine other possible causes.

Next week I am staying home and will just take it easy. My brother will be visiting and I’ll hang out with him. The original plan was to go into Hamburg to the Reeperbahn and get crazy. That plan has been scratched. I predict there will be some collective chilling going on accompanied by extended periods of taking it easy.

The week after starting on the 16th I will be sent on a 3 week treatment at the Herz- und Gefässzentrum Bad Bevensen. This will consist of cardiovascular exercise and training along with teaching about the heart and its proper care. The other important aspect of this will include doing some treadmill running hooked up to EKGs and doing various stress tests. (“Gentlemen, we can rebuild him. We have the technology”). These tests will hopefully help determine the cause and ways to prevent it from happening again.

I had an interesting New Year’s. At around noon M and I went to lunch in Mältzer’s with Angela and her new boyfriend, Steffen. I ordered a Milchkaffe and a pizza. When I was done eating I had a heart attack. No shit.

It was very mild. I didn’t pass out or fall down or anything but it was certainly very uncomfortable, not to mention scary. Symptoms included numbing pain on the underside of my left arm that spread out across my chest, difficulty breathing and breaking out in heavy sweat. I could feel my heart beating very forcefully in my chest. Angela suggested going to the doctor if it got worse. A few minutes later I stood up and said that something was wrong and that I had to get out of there.

I had this feeling for a couple days before but didn’t think it had anything to do with my heart. I was sick on the 26th with a stomach flu and spent the next few days in bed. I had thought that I got a pinched a nerve from lying in bed for 3 days. When the feeling in my arm first appeared, it was accompanied with fever so I thought it was a combination of pinched nerve and residual flu symptoms. On Friday I went back to work and while at my desk I had the same thing happen; pain in my arm and slight fever. I went home, took a pain reliever and it was better within the hour.

Saturday was different. After I had gotten outside where it was cooler, I had already started to feel a bit better but it was still really uncomfortable. We said goodbye to our friends and headed to an emergency station. They weren’t open yet but when we explained what the problem was they let us come in while they called a doctor. After the 30 minutes it took for the doctor to figure out how to turn on the EKG machine (ahem…switch on the powerstrip) and crack my back (he was a chiropractor; Oh you got a heart attack? I’ve got just the thing. Crik-ik-ik-ik), we finally got a read-out. By this time I was feeling much better, no doubt because of my spinal realignment (sarcasm). The doctor looked at it and said that the heart was beating steadily and strong but that something about it looked funny.

He took us to the real emergency room where they took some blood, did some quick tests and another EKG. They determined there was indeed something wrong and that I would be spending New Year’s Eve in intensive care hooked up to a heart monitor. A few minutes later they had their heart specialist come in and do a heart catheterization to determine if there was any blockage on the heart that needed to be removed immediately.

For those that don’t know, a heart catheterization, in its simplest form, entails making a small incision in your groin into the vain that leads directly up to your heart. They stick a long thin hose into the vain and shove it all the way up and around into the heart. You’d think there would be a shorter way to the heart but I was not in the mood, condition or position to argue. They spray some dye or something into the heart and with the use of an x-ray machine they can determine if there is some blockage somewhere causing the problem. I was pretty scared but in hindsight there was no reason to be as it is a really simple procedure.

They found no blockage whatsoever. Now they are trying to determine what caused it (probably a blood clot) and why (still unknown). I’ve had numerous EKGs and blood tests. Yesterday I had an echocardiogram which showed everything being OK. Tomorrow I am supposed to have an internal echocardiogram which entails putting wires and hoses down my throat into my stomach in order to get a good look at the backside of my heart. This will help to determine if there is possibly a small hole in the wall between the left and right ventricles. This may be what has caused the blood clot. If there is a hole, I don’t know what the next step is.

They said that it is probably not caused by my lifestyle. I’m only 29. I rarely eat fast-food. I eat pretty healthy. I’m not a heavy drinker. I should get some more exercise. I’m a bit overweight but not obese by any stretch of the word. The one bad thing I do is smoke, but not heavily. I can stretch a pack of smokes out for about 2 weeks. That is if I buy my own. Anybody that knows me, knows that I am the biggest cigarette moocher there is. However, as any doctor will tell you, smoking a little is already too much. I bet you can guess what my New Year’s resolution is.