About a block from our house, a bridge called the Reichenbachbrücke is being rebuilt. The construction will last about a year and it has already led to a significant increase in traffic driving past our house as a result of drivers taking detours due to the bridge being closed. As a result of the new bridge, a few trees have to be cut down. A few local environmentalists are not cool with that. In fact, they are outraged, OUTRAGED! I tell you. So outraged that they have climbed up into the trees and won’t come down. They have brought tarps and sleeping bags with them along with lots of food and warm clothing. They have hung up a large sign between two of the trees with a clever slogan: “Kopf benutzen, Bäume schützen, Bäume benutzen.” A few people from all over Germany have joined them. Those that don’t fit in the tree have pitched a tent below and they are acting as a sort of support team for the tree dwellers.

Way to stick it to The Man, man. 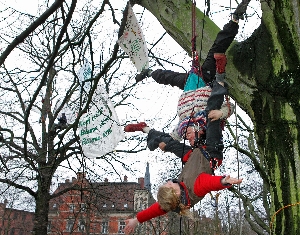 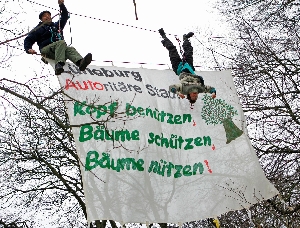